The Rambo style in which the Governor of the Bank of Ghana (BoG), Ernest Kwamina Yedu Addison is collapsing local banks senselessly is partly to blame for the depreciating cedi against the dollar, controversial musician and member of the New Patriotic Party (NPP), Kwame Asare Obeng better known as A Plus has attributed.

A Plus who is of the view the BoG governor lacks wisdom and common sense to deal with the banking crises, observes that his interest only lies in collapsing local banks and now considering same for savings and loans companies.

His comments on social media sighted by MyNewGh.com are reaction to a tweet by a UK economist Charlie Robertson who has described the cedi as the cheapest in Africa having depreciated by 8.6 percent this year alone.

His tweet reads “#Ghana’s currency in the last few minutes has just become the cheapest in Africa – (at GHS5.745/$) – based on our real effective exchange rate model. Despite a current account covered by FDI and double-digit interest rates #cedi”

Cedi Depreciation: Your “Boot For Boot; Is More Like…

But A Plus who is doubtful about the competence of the current governor of the Central Bank indicates that some of his decisions and actions are to blame for what the country is facing at the moment.

He wrote on his Facebook page “This is what happens when you have a governor of Bank of Ghana, who collapses banks in Rambo style, promises that depositors’ monies are safe, employees are safe, however cannot pay depositors their money, sacks employees anyhow. As if that is not enough, causes more panic by announcing on radio and TV that, though he cannot pay depositors after closing down banks, his next target is savings and loans and triggers panic withdrawals at savings and loans…

In conclusion, the governor of Bank of Ghana lacked two things in his handling of the banking crises; wisdom and common sense. In Ghana people like to be seen to be working than actually working.” 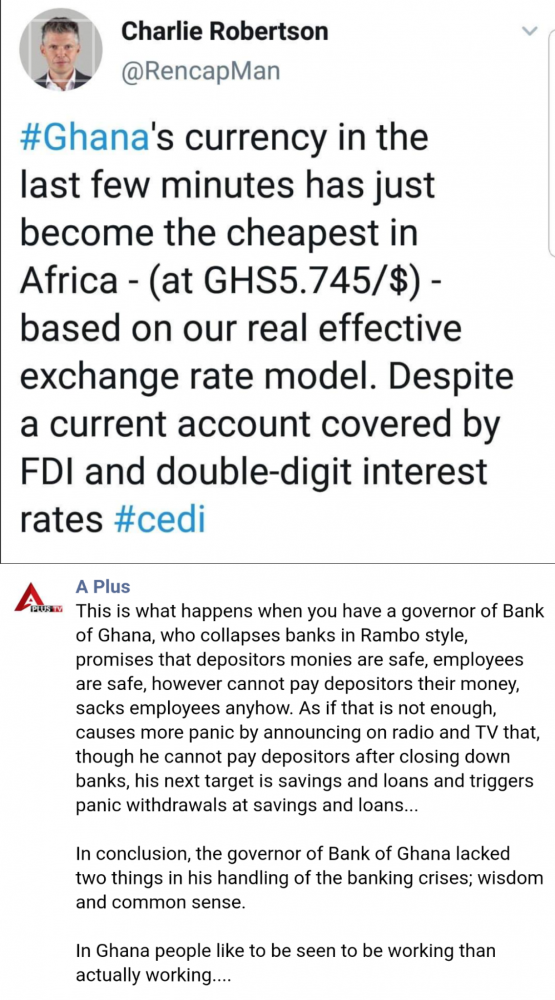 CEO Of Charterhouse Reunites With Shatta Wale Ahead Of VGMA’19