The Onua FM presenter in a video making rounds on social media dragged Tracey Boakye to the cleaners for disgracing herself publicly without having a second thought.

According to Kwabena, he is very shocked Tracey Boakye got the nerves to publicly state that she is proudly dating a rich sugar daddy with whom she has a child with.

Kwabena asserted that the boss of Shakira Movie Production is a disgrace to all women for being a side chick of a married man and having a child with him on top of it.

The pissed-off radio presenter stated without mincing words that Tracey Boakye’s newborn baby has no surname.

He labelled Tracey as a big fool for ‘attacking’ Mzbel over a married man. 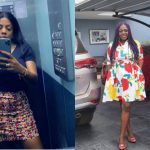 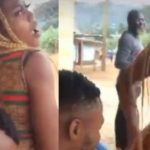 Shocking! Slay queen dies shortly after twerking for her boyfriend at a spot (Video)