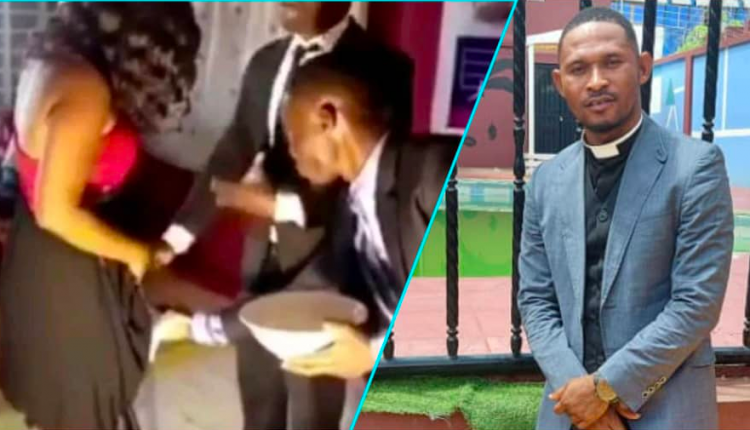 Pastor Blinks who became an internet sensation with his viral “shaving video” has courted unpleasant attention for and also attracted a lot of negative comments for himself.

Reacting to this video, Pastor Blinks disclosed during an interview that the Angels in Heaven told him to shave ladies’ private parts and wash their panties also.

He also revealed that he has a lot of branches scattered in the country.

Pastor Blinks who showed no remorse for his infamous actions backed his act with a Bible quotation, Leviticus 14 vs 8 which states that he who needs to be cleansed shall shave his hair, wash his clothes and wash in water that he may be clean.

Commenting on this trending issue,  Prophet Peter Aklah of Animouyam Global Chapel located in Kumasi has bashed Pastor Blinks for disgracing the Christiandom.

As argued by Pastor Peter, what Pastor Blinkz did is an abomination and has invited curses unto himself.

Nana Ama McBrown wades into the Relationship and dating Saga.

Bishop Obinim closes down all branches of his church; Here’s why

Ama K Abebresse at the mercy of Ghanaians, told to shut up about Buhari

Someone will chop your daughter if you keep sharing her…

“Ebony was on the same level with Shatta Wale and…

My DNA is Music And I can’t escape it – Wendy…