Kumasi: Man shoots himself in the head after firing shots at an innocent aboboyaa rider (video) 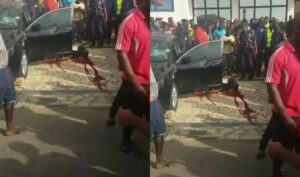 This tragic incident happened in a suburb in Kumasi known as Ayeduase.

According to the people who witnessed the ordeal, this driver who is believed to be mentally challenged pulled a pistol from his car and fired shots at an innocent aboboyaa rider & painter who confronted him for wrong parking.

After gruesomely shooting the aboboyaa rider, he also shot himself in the head to death and bled to death before the police arrived.

Police officers quickly made it to the terrifying scene after the news went rife.

The two have been sent to he KATH morgue.

Kindly watch the video below to know more…

Victoria Lebene is cheating on her husband – Funny Face alleges