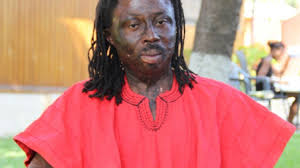 Popular Witch Doctor, Kwaku Bonsam has taken his political aspiration seriously as he projects billboards to contest as a parliamentary candidate.

He yarns to represent the people of the Offinso North constituency of the Ashanti Region in Ghana’s parliament thus he is canvassing for votes to make this a reality.

The Witch Doctor believes a transition from the consultation of gods to the wearing of a suit and tie and sitting in the air-conditioned office of the parliament house is not an ambition beyond him.

There is a hurdle however almost insurmountable ahead of him  since he will be facing strong opposition from three other candidates, including the incumbent MP, Augustine Collins Ntim, the National Democratic Congress’ (NDC) Ofosu Acheampong Caesar and another independent candidate, Boateng Sumaila.

In an interview Myjoyonline.com had with residents of the constituency, many of these people do not think the fetish priest stands any chance of winning in the upcoming polls.

Sammy Awuku Expresses Hope of a ‘Resounding’ Victory for the NPP

Nigerians Have Condemned President Buhari’s Speech as He…