Young Ghanaian millionaire and businessman, Ibrahim Dauda popularly known as Ibrah One have stated that he feels bad for Menzgold customers who are hoping to get their money back.

According to Ibrah one, the CEO of Menzgold Nana Appiah Mensah popularly known as NAM1 is just buying time and that the Menzgold customers are being lied to.

Last week, the so-called brother of NAM1 known as KOD claimed that Nana Appiah will be returning to the country on 15th April to pay customers their due dividends.

However, Ibrah One is of the view that this is just a ploy to deceive Ghanaians and that he feels sad for the customers.

Strip Stonebwoy Off His Awards And Arrest Him; Angry…

The young millionaire took to social media to share his sentiments. He stated; “I feel bad for Menzgold customers who still have hope of getting their money as promised by NAM1. Nigga is just buying time so he announced that the Menzgold customers will be happy from the 15th April. Let’s see” 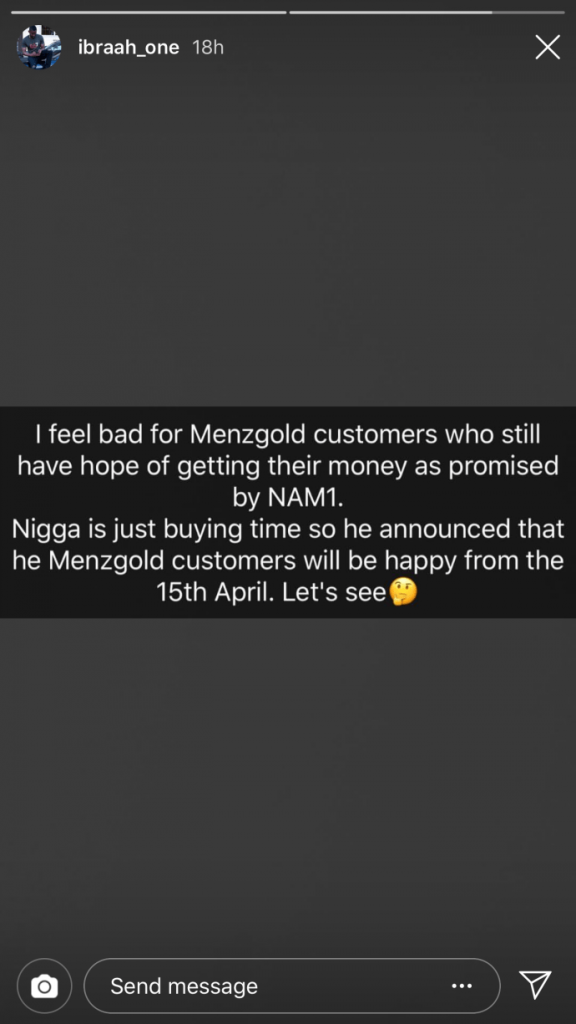 Ibrah one has always been on the case of Nana Appiah Mensah, claiming he is a fraud and even warned Ghanaians several times against investing in the gold trading firm, Menzgold but it fell on deaf ears.

Currently, Nana Appiah Mensah is out of the country but it is believed he is hiding in Dubai. Some Menzgold customers have petitioned the government to help them retrieve their monies.

Well, let’s hope Nana Appiah Mensah arrives in Ghana on 15th April as disclosed by his ‘brother’ to settle his customers.

Tracey Boakye and Safina Haroun confronts each other on live radio