Day-in day-out Gospel musicians and men of God keep on losing the respect their followers and believers have in them due to their actions outside the church or the ministry they represent.

Gospel Musician, Anita Afriyie was in the news last week for the wrong reason, and this week’s reason is not far from wrong.

Earlier, Anita Afriyie was headlined on major entertainment news outlets for fighting with her father during a Facebook live session because she disturbs her father with her so-called prayers and worship.

In that video, Anita’s father accused her of being a witch, and we think he was right to an extent.

Information available to Gossips24.com indicates Anita and her husband have threatened to do worse to their landlord who lives here in Ghana.

A source closer to the landlord whispered to Gossips24.com that Anita and her husband have been occupying the said Landlord’s property since 2015 after paying 2-years-rent which was supposed to be due in 2017.

When the landlord confronted the couple, Anita and her husband, they allegedly threatened to harm and kill him.

Gossips24.com is yet to hear Anita’s side of the story, but videos available to us actually shows the confrontation moment between Anita’s husband and their landlord. 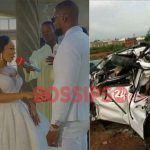 SAD! Man dies in a car accident three days after his wedding (photos) 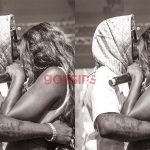