In a post sighted by a reporter at Gossips24.com on the page of Kafui Danku, the mother of one has alleged that, Leila Djansi had been badmouthing her to other people most notably her friends .

As claimed by Kafui Danku, she once agreed to help a lady known as Doris whom Leila seeked for help on her behalf but refused to grant her second wish I.e request of “thousands of dollars ” which she declined.

Going haywire on her page, she wrote;

I know you’ll see this faster than my missed call. I’m someone who doesn’t listen to people when they warn me to be careful of a particular person ; NO, I don’t listen but I’m posting here to confirm to them they’re right since I’m too embarrassed to tell them personally, I might as well make the whole community aware that you’re DANGEROUS!

I will be blunt : You asked me for support to help Doris which I obliged .
You later came back to ask me for thousands of dollars which I didn’t give you so you went round telling people stupid and childish lies…

I want them to know that your stupid blabbing is all about the fact that I didn’t give you what you asked for. If anybody has warned you to be careful of Leila Djansi, believe them !

I’m A Better Actor Than Akrobeto, Lilwin And Any Other Movie Star In The Industry – Agya Koo Brags 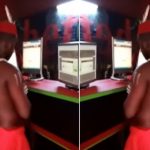