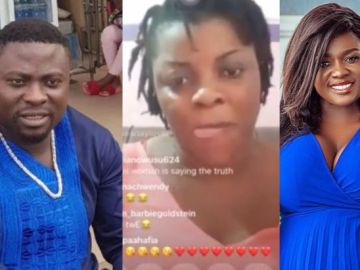 The latest name to surface in the Gloria Kani and Tracey Boakye’s bitter and prolonged quarrel is gospel minister widely known as Brother Sammy in both the gospel misc fraternity and entertainment industry at large, Gossips24.com reports.

Another unpleasant claim dropped by Gloria Kani on the internet space is a wild allegation which purports that, Tracey Boakye slept with Brother Sammy whilst she was seeing her baby daddy.

According to Gloria Kani, Tracey Boakye’s baby daddy not might be the biological father of the baby he’s taking care of because Tracey was busily ‘chopping’ herself with Brother Sammy.