After fiercely battling with Mzbel in the heavyweight d!ck championship. Movie actress-cum-producer Tracey Boakye has engaged in another brutal beef with her ex-best friend who is a slay queen turned evangelist widely known as Gloria Kani, Gossips24.com reports.

Prior to this wild claim, it can be recalled that Gloria Kani has critically warned Tracey Boakye not to ‘try’ her because she if she ever does, the dirty secrets she will drop on the media space will collapse the NDC party.

Sighting from latest video shared by Gloria Kani, the female evangelist has critically asserted that, Tracey Boakye was seriously chopped by a deliberately unnamed “big man” who dashed her 200 cedis after the se*ual encounter.

According to Gloria, Tracey is an ashawo who sleeps with politicians and top businessmen for money and luxury gifts for money. 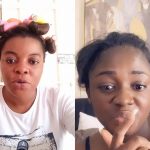 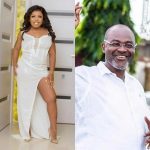