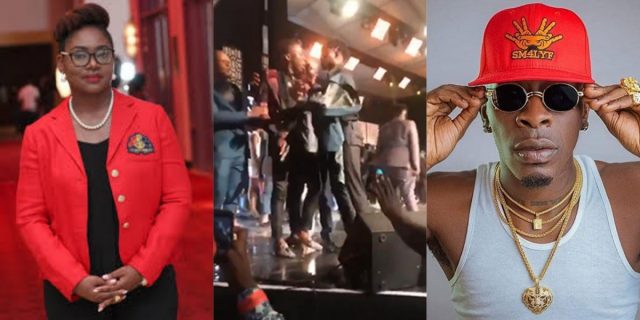 One-time Ghana Music Awards ‘Artiste of the Year’ Charles Nii Armah Mensah popularly known as Shatta Wale has poured his wrath on the organizers of the Vodafone Ghana Music Awards, Charterhouse over his ban from the awards scheme.

The Shatta Movement Empire boss was raged as to why Chartehouse took a decision to suspend him and Stonebwoy from the VGMAs due to the brawl that occurred at the previous edition.

Shatta Wale took to Facebook to do a live video where he send a message of caution to Madam Theresa Ayoade, the Chief Executive Officer of Charterhouse.

Shatta Wale in the video warned Madam Theresa to be mindful of the things they say about him else he will send his Shatta Movement boys to deal with them.

Watch the video below;

‘If you want to make it in life, stay away from jobless ladies with high taste’ – Lady warns Men