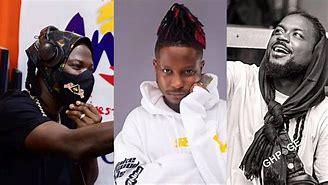 Samini formally known as batman has been in the bad books of entertainment lovers for some time now.

His latest revelation has caused stirs on social media that has earned him the tag of being an opportunist.

Stonebwoy who was under the High grade record until is liberation signed rising artist Kelvyn bwoy under his Bhim nation record label.

Samini however has made claims in a recent video that he was the one who was supposed to sign Kelvyn bwoy but Stone bwoy did it instead.

Fans blast Samini and tells him to go for Kelvyn boy now that he is a free agent.

Joe Mettle Says Ladies Still See Him As The Hottest Man And Hit On Him Even Though He Is Married.