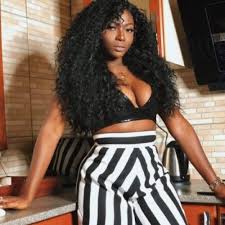 Promising Ghanaian female vocalist who performs under the stage name Sefa, has revealed that she’s still single because all the guys she has dated so far were only interested in her coochie.

The diva who is signed under DBlack’s BAM music further noted that she’s not in a rush to jump into a relationship although she has been single for the past five years.

Whiles speaking in an interview on OKAY FM, she said;

I once met a guy who proposed to me and chased after me. Unfortunately for me, I saw his wedding invitation card last week. I don’t understand why he would do that to me knowing fully well he was going to get married soon. I’m glad I didn’t give him a chance to fool around with me,” she revealed in an interview on Okay FM