The groom, identified as Mr Effun-Atteh who resides in Cape Coast was on his way to his wedding received a call from a client to fix his DSTV.

Despite the fact that it a was big day for him, he left his beautiful bride waiting as he moves swiftly to the client’s house to get the decoder fixed.

Though he was late for his wedding, he still had time to fix the DSTV and take some pictures with the neighbours who were amazed by his selflessness 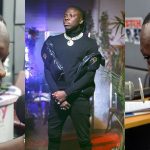 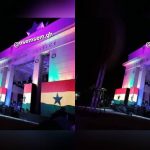