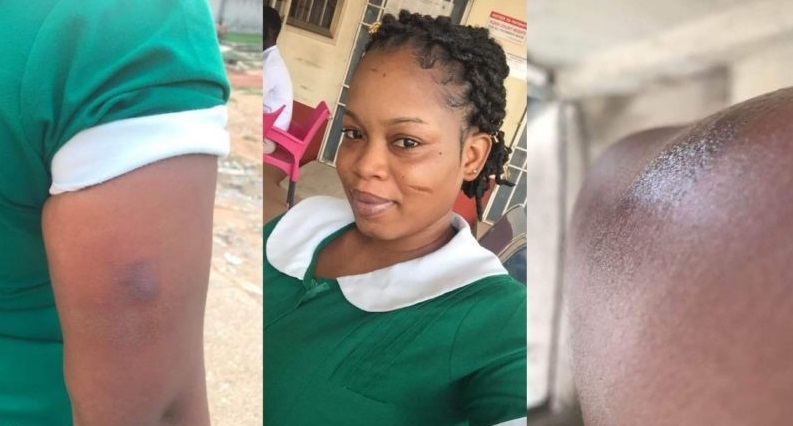 A Ghanaian nurse from Kumasi has taken to social media to accuse some military men who physically assaulted her on her way home from work.

The nurse identified as Cecilia Awinsongya in a post on her Facebook timeline revealed while on her way home from work, she was assaulted by military men tasked to enforce the lockdown in Kumasi.

She shared this together with a picture depicting the bruise on her body to prove that she is not indeed framing up.

Although, health officials were exempted from the lockdown but Cecilia says she was beaten by some military personnel in Kumasi.

She wrote this on Facebook accompanied by photos depicting the bruise on her body.

”Today am very sad ,i don’t know what was my fault, for being in uniform and still assaulted by a military man today when I closed from work. Did the president really told the military men to come to Kumasi to beat us including health workers who r working tirelessly day and night risking the lives to save the lives of people. Pls friends and family pls help me to share this pictures to reach the media houses n the various stakeholders to fight for our rights,I don’t think military men have to put the laws into their hands to abuse people like common crimals.”

JOIN THE FUN, SHARE THIS !!!
Share
Related Topics:Ghanaian nurse accuses military men of assaulting her in Kumasi
Up Next