Ghallywood actress and entrepreneur, Fella Makafui has been allegedly accused of theft.

Gosspis24.com sighted a story in the 15th February edition of the Daily Guide newspaper with caption ‘Fella Makafui in robbery allegation’.

Background of the story

Last year December, there were a whole lot of controversies  surrounding the premiering of an upcoming movie titled ‘Kakalika love ‘ at the National Theater in Accra.

These controversies started when the movie producer Samuel Degraft Yeboah and Fella Makafui engaged in social media war, throwing shades at each other left right center.

This was due to the fact that the producer used Fella’s photo at the cover page of the movie without her knowledge.

However, prior to the premiering some people broke into the movie producer’s home at Ablekuma, a suburb of Accra, and took away five of his hard drives.

Samuel Degraft Yeboah, the producer of ’Kakalika Love’ therefore accused  Fella Makafui of being the mastermind behind the robbery.

Moving forward,  Samuel in an nterview with News-One reiterated that he suspects no other person than Fella Makafui.

According to him, Fella, who is also in the movie, was highly against the movie’s premiere.

Reasons being that, Fella didn’t like the idea that the movie is titled ‘Kakalika Love‘ just as Deborah Vanessa’s hit single which focuses on her controversial relationship with rapper Medikal.

“When we went out to promote the movie, she sent people to my house to pick five of my drives with the mind that ‘Kakalika Love’ is on the drives, so to stop me from premiering the movie. Unfortunately for them, the movie is not on any of those drives. They took my camera, laptops belonging to my workers and decoders. The drives contain films that I have shot,” he alleged.

Samuel added that he first reported the case to the Ghana Police Service (GPS) but several attempts to get Fella for questioning proved futile. The case was then moved to the police headquarters.

Efforts to get a response from Fella Makafui till date has still proved futile. She didn’t even pick her call when the police contacted her on last Thursday. 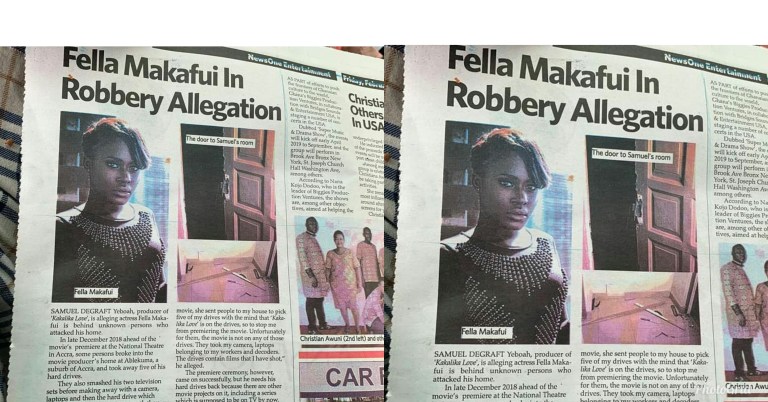