A March for Justice: Congolese Women Take it to the Streets 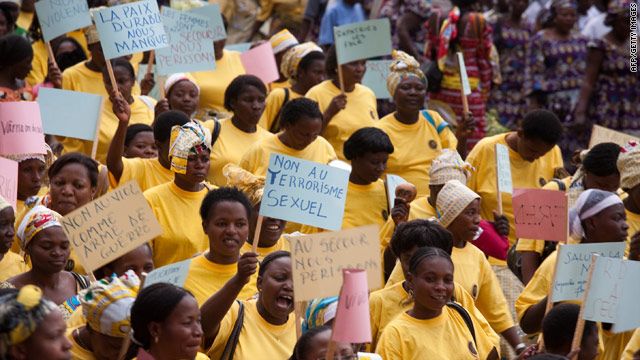 In a bid to drive home their demand for justice for victims of sexual assault and war crimes, Congolese women have taken to the streets of Kisangani in eastern Congo.

Endowed with one of the most expensive natural resources, Coltan, a mineral used in the manufacture of electronic devices, the country still continues to punch below her economic waves.

Years of war, poor leadership and governance has left the country devastated with many cases of human rights abuse by war criminals and soldiers.

The rich mineral, Coltan, has also become the source of many of the wars thus becoming a curse rather than a blessing.

With millions displaced and millions killed, statistics indicate that at least 48 women are raped in the country every hour with authorities looking on unconcerned.

With the Mukegwe foundation supporting, the women are marching to bring their plight to the notice of the whole world.

Nadia Buari joins #EndSars protest; mourns all who died as a result of police brutality in Nigeria (video)

Kenyan Tea Farmer, 70, Attemps Chopping Off His Manhood After Being Accused of…

Charlotte Oduro lashes out at slay kings for being husband…

“Fooling” Made Me Have Enough Money To Get A Wife Clemento…