Beverly Afaglo exposed for allegedly lying about the house that got burnt!

Popular Ghanaian actress, Beverly Afaglo has been exposed by a netizen for lying about the said house that got burnt yesterday.

It’s almost everywhere that Beverly Afaglo’s house caught fire and got burnt to ashes. Though she earlier blamed it on the inefficiency of the Ghana Fire Service until her recent interview where she explained how her mother’s gardening habit caused the fierce fire to ruin the beautiful house.

Though Beverly has made it public that the house belongs to her, a social media commentator who knows the house has revealed otherwise.

According to the yet-to-be-known commentator, Beverly lied to the world about the house. The house does not belong to her as she’s made the world believe, neither does she live there.

Stonebwoy Helped Me With Cash After My House Got…

Choirmaster mocks Ghanaians once again as he goes panty…

Choirmaster fires Ghanaians as he defends his wife for…

Rather, the house belongs to Beverly’s mother, and that’s where her mom lives so she visits occasionally.

The commentator also added that it sounded surprising that Beverly stated that she lost her clothes, passports, clothes belonging to her kids, and other valuables – indicating that’s where she lives. 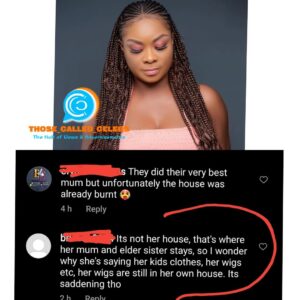 Clement Asamoah Yeboah is a Ghanaian Blogger, Podcaster, YouTuber & E-commerce enthusiast. I love to read, write, talk and record videos. He gained prominence among bloggers in Ghana after promoting BET Nominee Kwesi Arthur in 2017 to win the VGMAs and also head for the Black Entertainment Awards. Clement has been nominated and awarded by Avance Media twice among the Top 50 Bloggers In Ghana.
Connect with me on Instagram @_justclement
CONTACT: atokwamena184@gmail.com

Showboy Calls On People Who Have Bought House From Criss Waddle To Check Through Their Documents, Says “He Go Scam You”