Be like Kevin, pay for work of artists who draws you – Mimi to Ghanaian celebrities

Hollywood comedian, Kevin Hart, has requested to pay for an artwork of a Nigerian artist who drew him and shared it on Twitter to attract some exposure.

According to defunct Ghanaian singer, Mimi, Ghanaian celebrities should follow Kevin’s tangent and support artists who draw them too.

A Nigerian pencil artist, Eli Waduba, shared his piece of work on Twitter and pleaded with the twitter community to share it until the superstar comedian sees and he’s gotten just that result but with a bigger surprise.

Kevin Hart speaks for the first time after car crash at…

Kevin Hart, replied his tweet saying that he has seen the work and he would love to purchase it and support him by giving him some more money to draw some of his celebrity friends.

She has therefore called out Ghanaian celebrities to do similar to support artists who draw them than just to repost their works.

See a screenshot of Mimi’s post below and tell us what you think. 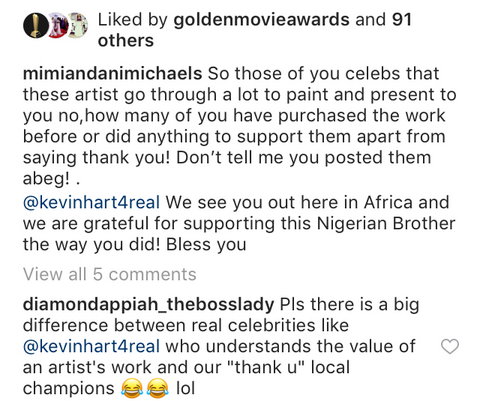