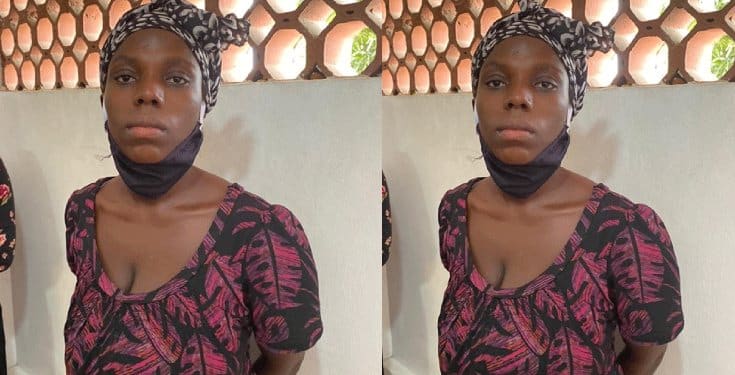 A 22-year-old Nigerian lady has drowned her baby because she prevented her from achieving her bigtime dream.

The lady identified as Adisa Funmilola drowned the one-year and six months old baby inside a bucket of water in her apartment at Plot 22, Gowon Estate, Lagos, on Monday, and then reported herself to the Police.

Upon interrogation, Adisa narrated her story that she conceived for one Yusif Folarin while they were both students attending class at the City of Success in Abeokuta of Ogun State.

Yusif denied the pregnancy and asked her to abort it of which she refused. Along the line, she was offered admission at the Obafemi Awolowo University in Ile-Ife to study law but she had to defer the admission because of the baby.

Surprisingly, Folarin did not show remorse for her action. She said: “I killed my baby and reported myself to the police. I filled a bucket with water, dipped her inside and held her head until she died. I did it for three reasons.

First, I didn’t have the financial might to take care of her. Second, I was tired and frustrated. But the most painful reason is that she deprived me of actualising my dream of becoming a lawyer.

I would have aborted the pregnancy, but my father advised me against it. The person that is responsible for the pregnancy rejected me. I live with my sister, who has no job and I am also not working.”

When questioned by the police if she knew the consequences of her crime, Adisa smiled and said: “The most important thing is that I have killed the baby.”

Her elder sister, who expressed shock at her sibling’s action, said she was at home on the day of the incident, but never knew what the latter was doing until policeman stormed their apartment.

She said: “I suspect she is mentally deranged because our mother had a similar mental issue before she died.”

The Police said the suspect undergo psychiatric test but that will not stop her from facing the consequence of her action.

JOIN THE FUN, SHARE THIS !!!
Share
Related Topics:22-year-old lady kills her baby for making her miss university admissionAdisa Funmilola
Up Next