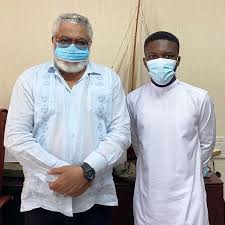 Multi-talented Ghanaian comedian and actor who performs under the stage name, Clemento Suarez.

Has been critically cautioned by the family of Chairman Rawlings to immediately put an end to the short videos he has been releasing in which he mimics the former head of state before and after his shocking demise.

Clemento Suarez fed the general public with this information during an interview with UTV.

I was called by ex-president Rawlings’ family to stop imitating him from now until he is buried. I was told to respect the dead and more so his personality as a former president

He ended his submissions on the directive from the Rawlingses that he will obey the diligently observe the instructions he has been given.

Obiaa wone master! Watch the moment Nana Ama Mcbrown’s husband turned into a schoolboy in front of Kwame Despite