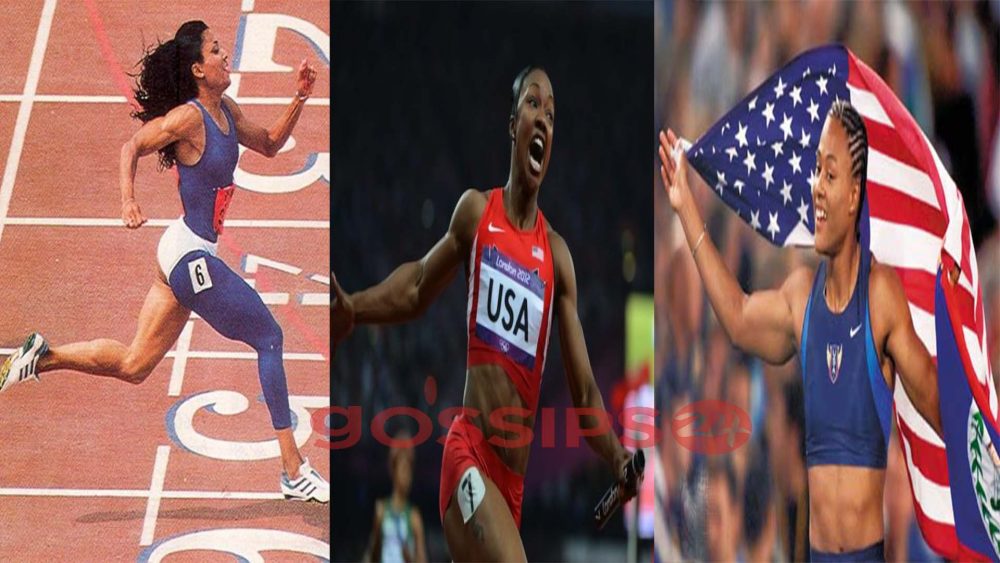 Some athletes have ruled and dominated the world scene for a long time.

Below are 10 of the world’s best and fastest track and field women athletes that have ever ruled the game.

During the late 1980s, she became a popular figure in international track and field because of her record-setting performances and flashy personal style. Griffith-Joyner was born and raised in California. She was athletic from a young age. She attended California State University, Northridge (CSUN) and University of California, Los Angeles (UCLA) where she participated in track and field.

Griffith-Joyner qualified for the 100m 1980 Olympics, although she did not actually compete due to the U.S. boycott. She made her Olympic debut four years later, winning a silver medal. At the 1988 U.S. Olympic trials, Griffith set a new world record of 10.49 seconds in the 100m. She went on to win three gold medals at the 1988 Olympics. In February 1989, she abruptly retired. After her retirement from athletics, Griffith-Joyner remained a pop culture figure through endorsement deals, acting, and designing. She died in her sleep as the result of an epileptic seizure in 1998 at the age of 38.

Carmelita Jeter was born on November 24, 1979. She is an American sprinter, who specialized in the 100 meters. She was the 2011 IAAF World Champion in the 100m and a three-time Olympic medalist.

She won the 100m bronze at the 2007 World Championships in Athletics and a gold at the World Athletics Final. She won a second World Championship bronze. Her victory in the Shanghai Golden Grand Prix in 10.64 seconds in 2009 made her the second-fastest woman ever in the 100m, behind Florence-Griffith Joyner’s long-standing world record. Currently she holds three of the top ten times ever run.

Marion Jones was born on October 12, 1975. She is an American former world champion track and field athlete and a former professional basketball player for Tulsa Shock in the WNBA. She won three gold medals and two bronze medals at the 2000 Summer Olympics in Sydney, Australia, but was later stripped of her medals after admitting to steroid use. Jones did retain her 3 titles as world champion from 1997–1999. She ran 10.65 seconds in Johannesburg, on September 12, 1998 to become the third fastest woman on earth.

At the time of her admission and subsequent guilty plea, Jones was one of the most famous athletes to be linked to the BALCO scandal. The case against BALCO covered more than 20 top level athletes, including Jones’s ex-husband, shot putter C.J. Hunter, and 100 m sprinter Tim Montgomery, the father of Jones’ first child.

Shelly-Ann Fraser-Pryce, born 27 December, 1986, is a Jamaican track and field sprinter. Born in Kingston, Jamaica, Fraser-Pryce ascended to prominence in 2008 when at 21 years old, the relatively unknown athlete became the first Caribbean woman to win 100m gold at the Olympics. In 2012, she successfully defended her 100m title, becoming the third woman to win two consecutive 10 m gold medals at the Olympics. In Kingston, she ran 10:70 second to become the fourth fastest woman of all time.

Fraser-Pryce took a break from athletics in 2017 to have her first child. In 2019, she became the oldest woman and second mom in history to win 100m gold at the World Championships.

With over a decade of dominance in the sport, Fraser-Pryce has won more global 100m titles than any other sprinter in history, male or female. Nicknamed the “Pocket Rocket” for her petite frame (she stands 5 feet tall) and explosive starts, she is ranked fourth on the list of the fastest 100m female sprinters of all time, with a personal best of 10.70 seconds.

Elaine Thompson was born on 28 June, 1992. She is a Jamaican track and field sprinter. She rose to prominence at the 2016 Olympic Games in Rio de Janeiro, completing a rare sprint double to win gold in the 100m (with a time of 10.72 s) and the 200m (21.78 s). She became the first female sprinter to do so since Florence Griffith-Joyner at the Seoul Olympics in 1988. Thompson currently ranks as the fifth-fastest woman ever in the 200 metres event and tied fourth-fastest in the 100 metres, with a time of 10.70 seconds in Kingston on July 1, 2016.

Christine Arron, born 13 September, 1973, is a former track and field sprinter, who competed internationally for France in the 60 metres, 100 metres, 200 metres and the 4×100 metres relay. She is the world’s sixth-fastest female 100 metres sprinter of all time with 10.73 secs, which she ran on August 19, 1998 in Budapest, which is still the European record. She set the record when winning at the 1998 European Championships, where she also won a gold medal in the 4 × 100 m relay. Also in the relay, she is a 2003 World Championship gold medalist and a 2004 Olympic bronze medalist.

Ottey had the longest career as a top level international sprinter appearing at the Pan Am games in 1979 as a 19 year old fresh from U20 and Junior competitions, and concluding her career at age 52 when she anchored the Slovene 4 × 100m relay team at the 2012 European Championships. A nine-time Olympic medalist, she holds the record for the most Olympic appearances (seven) of any track and field athlete. Although gold medal success at the Olympics eluded Ottey, she was able to bring home three silvers and six bronze medals. She won 14 World Championship medals, and still holds the record (as of 2017) for most medals in individual events with 10.

English Gardner, born on April 22, 1992, is an American track and field sprinter who specializes in the 100-meter dash. Her personal best of 10.74 seconds, set in Eugene 2016, ranks her as joint seventh with Merlene Ottey as the world’s all time fastest woman.

Kerron Stewart, born on 16 April, 1984, is a Jamaican sprinter who specializes in the 100 metres and 200 metres. She is the 2008 Jamaican national champion in the 100 m clocking 10.80s. She defeated World Champion Veronica Campbell-Brown in the process and now is the 2008 Summer Olympics silver medalist after she tied with Sherone Simpson in a time of 10.98s. She also earned a bronze medal in the 200 metres at the 2008 Summer Olympics with a time of 22.00s.

Stewart holds the fastest non-winning time for the women’s 100 metres. In the 2009 World Athletics Championships from Berlin, she ran 10.75 seconds only to finish second to compatriot, Shelly-Ann Fraser who ran a 10.73 race. Stewart also anchored the Jamaican 4×100 m relay team to victory in a time of 42.06.

As a teenager, Richardson won the 100m title at the AAU Junior Olympics in 2016, then another title at the USATF Junior Championships in 2017. She made her international debut at the 2017 Pan American U20 Athletics Championships, where she won a gold medal in the 4 × 100-meter relay alongside Gabriele Cunningham, Rebekah Smith, and Tara Davis. She enrolled at Louisiana State University and began competing for the LSU Lady Tigers track and field team. At the 2019 NCAA Division I Indoor Track and Field Championships, she was a finalist in both the 60-meter dash and the 200m.

At the 2019 NCAA Division I Outdoor Track and Field Championships, she won the 100m and placed runner-up in the 200m by less than one hundredth of a second. Both her times were world under-20 records for the sprints. Her NCAA performance, which also included second in the 4 × 100m relay, was the second best ever by a female sprinter, after Merlene Ottey.

UNN’s only surviving Chimpanzee dies at 50 in zoo

Andre Ayew reacts to footballer of the year award

BREAKING: UEFA scrap away goals rule for all club competitions

Sergio Ramos trends on Twitter amid exit from Real Madrid