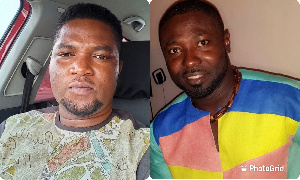 Popular Kumawood actor, Koo Musuo has lost his cool on Wei Ye Oteng’s negative comments about the Kumerica craze which has received several strong backlashes from other Kumericans.

The multiple award-winning sound engineer took to his Facebook page to predict that the Kumerica craze has no future and will be trashed soon.

Kumerica has no future Is dead on arrival because it was never thought through. We could have done it better by projecting us and not confusing ourselves. Confuse boys. #Otengbeats #WYO #Obrafour #drumlyneent #TheSmoke #behindthesmoke.

Bernard Aduse-Poku alias Koo Musuo has instructed Wei Y3 Oteng to shut up if he has nothing positive to say about the craze.

Koo Musuo also added that, Wei Y3 Oteng means nothing to the craze in a very harsh way which might obviously not go down well with the sound engineer.

Meanwhile the Kumerica craze has crossed the boundaries of Ghana and currently touring other parts of the world succeeding Asaaka’s Kumerica anthem.