Finally, the much-anticipated video Ghanaians have been waiting for, is finally out, citing from a viral video which is currently trending on the various social media platforms, Gossips24.com reports.

Beyonce ft Shatta Wale – Already comes off as one of the most streamed songs on the R&B and pop star’s last released top-charting album,  dubbed, The Lion King; The Gift.

Kindly take a look at some shots captured from the video shoot below; 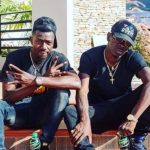