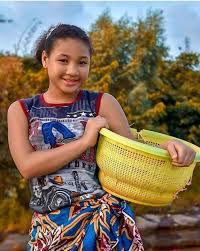 Pearl Shim Mugala also known as Daniella is a force to reckon with in Nollywood movie industry.

she was shaken to the roots when she  lost her mother some time ago.

Being on of the highest the best paid teen actresses in Nollywood, she has a bright future in the movie industry and beyond

our checks show that she  lives with her aunt in Benin City, Edo State and seem to be in good hands and spirits. In a recent picture she is all grown up and the smile are infectious.

Some the movies she starred in  includes Little Daniella, My Kids and I, All I want for Christmas, In Bondage, Lent, Hostage, and many more.

Davido Disappointed in Buhari for Addressing Protestors Once in 10 days

Senseless slay queen cries her eyes out and pees on herself…