Recently, it was reported that kumawood actress popularly known as Nana Ama McBrown had delivered a baby girl in Canada successfully after three years of marriage.

The actress who was full of joy and gratitude to God shared photos of her baby bump after her delivery to announce the arrival of her daughter.

However, a social user identified as Mannie Manuell has made some serious allegations against Nana Ama McBrown concerning the birth of her child.

According to the social media user, Nana Ama McBrown hired the services of a surrogate to carry her baby

The social media user also alleged that the actress’ tummy was inflated with air so it looks like she was pregnant.

Nana Ama Mcbrown Opens Up On Her Current Relationship With…

“U can’t fool anyone. Her tummy was just inflated with air to deliver after nine months and another woman carries the baby for her. Tell us the name of the lady who carried the pregnancy. This thing is done right here in Ghana“, the accuser stated. 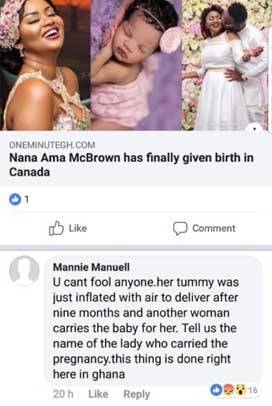 Well, it is obvious that the person behind this account identified as ‘Mannie Manuell’ is a hater and not a fan of the actress.