REVEALED: Here is what Dr Osei Kwame Despite did to Diamond Appiah 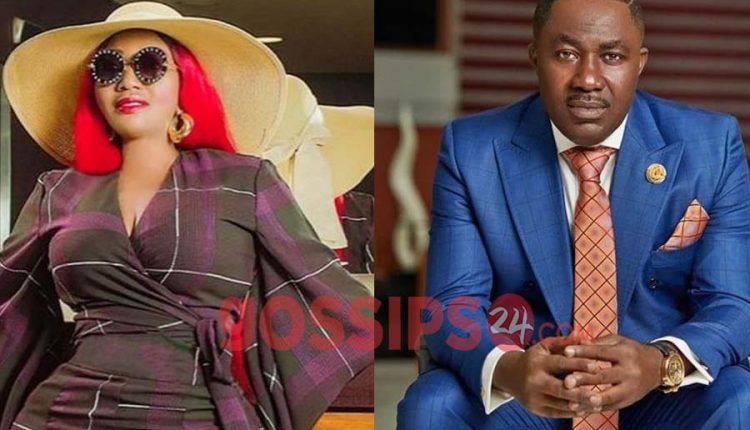 We earlier made a post on Ghanaian actress yet failed politician, Diamond Appiah picking a new fight with a very popular Ghanaian business mogul.

Diamond Appiah in a lengthy post on her Instagram page fired some shots at a supposed millionaire in Ghana probably a businessman.

She recounted how the supposed businessman paid huge sums of money to an European institution to confer a title on him in order to raise his status from an illiterate to a literate without proper education.

Portion of her post read; The cheap titles u payed those Turkish oo s3 east European scammers to come n confer on ur illiterate asses to upgrade ur kantamanto status doesn’t mean shit to a well educated lady like me.

The popular bosschick failed to mention names but thorough checks made by Gossips24.com can reliably state that Diamond’s rants on Instagram has something to do with millionaire businessman, Dr Osei Kwame Despite, chief executive officer of Despite Media Group. In case you missed our earlier report, [CLICK HERE].

Well, now back to more interesting details on the juicy brewing fight Diamond Appiah wants to pick with Dr Osei Kwame Despite.

Recall in 2018, the singer-turned-actress-turned planned to expose Dr Osei Kwame Despite and his brother, Dr Ernest Ofori Sarpong by shooting a biopic on how the two miraculously rose’grass to grace’.

The supposed movie titled ‘Superstar’, per Diamond’s account said is to honour the two business moguls who have employed thousands of Ghanaians. The film stars Akrobeto, Auntie B, Akyerebruwa, with promiscuous Vicky Zugah and many others.

Dr Osei Kwame Despite who got a hint of what Diamond had planned went all out to silence her, the reason the biopic is not released to date.

The businessman who didn’t want his dirty linens to be washed and dried in public promised to compensate her with huge amount of money in return pay for the cost of production.

This according to management is because Dr Osei Kwame Despite wasn’t happy his name, brand, and company were used in the movie.

But speaking in an interview with De Don on Hitz FM’s “You Sey Weytin” Diamond Appiah debunked the allegations saying the movie had nothing to do with Despite although a character in the movie bore Despite’s name.

According to her, she only agreed to cancel the movie out of respect she had for Despite and not because the movie was about him.

After patiently waiting for a whole year for her money, the management of Despite Group of Companies failed to fulfill its part of the bargain by paying her the cost of her movie production.

Fast-forward, in 2019, Diamond Appiah who felt deceived and cheated threatened to sue Despite Group of Companies for backing out on its words after the company promised to settle her if she stops her movie from premiering.

Now, cast your mind back to the reason Diamond threatened to expose the supposed businessman in her lengthy Instagram post.

Stay glued to Gossips24.com as we dig more on this particular development.

KiDi’s Thunder song is full of curses; It should be banned – Morris…

Shatta Wale readies to clash with Sarkodie and Stonebwoy on the same stage; Full…