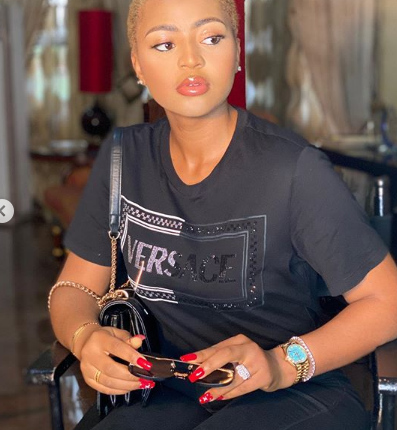 Nigerians are lashing out on Regina Daniels on social media for saying she loves Ned, her husband after she received a N24 million Rolex Watch from him.

The Actress after receiving the gift took to social media to flaunt it in a video with the caption; “Meet my four wheel plane…..Also a birthday present from hubby along side my 24million Naira watch…..love you baby … u are so extra…Ps: I need to show off … it’s mine”

This has however not been received in good faith by some Nigerians who think she’s only saying she loves Ned because of the gifts and not due to real love.

These are some of the comments;

1. DJ Fem ; “When you buy something for a woman, they will say they love you. The truth is that they don’t love you, they just love what they’re benefiting from you”

2. Peter ; “You don’t love your husband….You’re benefiting from him! You’re a benefit babe”

3. Gio ; “I hope ur hubby is not one of the treasury looters?? Because we are coming for them soon”

It Was A Great Privilege To Get Featured By Sarkodie- Koo…

I will not stop doing music – Trigmatic

Future Proceeds From Lekki Toll Gate Should Go To Victims of…

Typing Amen To Pastors’ Prayers On Facebook Won’t Make You…