Rufftown Records is well known for having a track record when it comes to lifting musicians from zero to hero with the aid of nudity.

The story of the late Ebony Reigns is not far from Wendy Shay, just that whiles one has talent, the other only has a pepper mouth and enough assets to flaunt.

In recent times we have seen how Wendy Shay has bragged of being the Queen of Ghana Music without having nothing to show for, not even enough streams or headline big shows – ow even Sarkodie did not invite her to perform on his show, not like anyone has! lol, not even the VGMAs!

Well, Wendy Shay has been making noise about her trashy song which was only complimented by Shatta Wale’s vibe – H.I.T (Haters In Tears) – which failed to make her haters cry but laugh over the fact that the song has been struggling to gain airplay, talkless of making it to the charts.

Today, Wendy of Rufftown Records decided to announce that she will soon release visuals of her H.I.T song with Shatta Wale. The announcement was twinned with a photo of the songstress flaunting her round oranges, and it got us wondering whether she was selling her song or her boobs!

Actually, the eyes of her followers were not attracted to the caption which includes the announcement, but rather her firm boobs which has nothing to do with her song. Though we all know that is part of her markeying strategy, we think it’s time Wendy puts aside the ‘sexiness’ and rather focus on producing some good songs if indeed she wants to earn the Queen of Ghana Music title, else she should rather show more breasts and be crowned Queen of Breasts in Ghana – period! 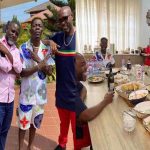