Gospel musician Joyce Akosua Twene, known popularly as Joyce Blessing has dragged the management of Accra-based Power FM to court following a comment she found inappropriate on their network.

In writ copied to Gossips24.com, the lawyers of Joyce Blessing said their attention was drawn to a radio programme called Power Entertainment aired on Power FM and hosted by Agyemeng Prempeh, in which a caller phoned on the show and labelled their client as a lesbian.

Portions of the writ read; “Our client’s attention has been drawn to a radio programme on your station christened ‘POWER ENTERTAINMENT’ which is aired on every Saturday afternoon. That on Saturday, the 5th of September, 2020 during the airing of the program you allowed a lady by name, Linda who among other things informed the world at large that our client is her Lesbian partner and that some of the three children our client are fathered by a certain, Kwesi Ernest knowing that these allegations are untrue.”

A week ago, a lady who claims to be the Joyce Blessing’s former lesbian partner.

According to the lady who mentioned her name as Linda, she was the partner of the musician for years during her stay in Kumasi.

Linda in an interview with Power Fm said she has evidence to back her claims, one of them was the fact that Joyce has a tattoo on her buttocks.

She dared DaveJoy, who happens to be Joyce Blessing’s husband to meet her for more evidence if he doubts her – Linda – claims. 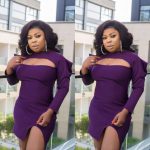