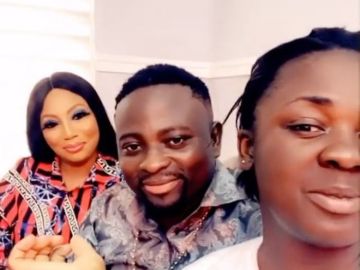 Do you have a house at East-Legon or you can explain? Tracey Boakye who has mastered to use internet trolls to her own benefit has once again subtly jabbed her critics in a self recorded short video.

In the video which captured gospel musician, Brother Sammy and female business mogul Diamond Appiah, the actress-cum-movie producer bragged that she mingles with only house owners.

The mother of two has successively bragged on several occasions that she’s miles ahead of her peers thus she has achieved more than them because she has a lot of expensive properties to her name.

The controversial celeb also added that she has been able to hire the rich Diamond Appiah because of her wealth and influence.

Earlier yesterday, Gossips24.com published an article about Tracey Boakye where she deliberately flaunted her s3xy legs after she was trolled by her attackers for having the feet of a 50-year-old.

Meanwhile, Brother Sammy was accused of sleeping with Tracey Boakye during the peak of the infamous “Papa No” brouhaha two months ago.

Kindly watch the video below to know more…

Money is good! Laycon hires a macho-man to guard him after becoming a millionaire (video)