CEO of 2HypeGang and former member of the AMG Business, Sam Sarfo widely known as Showboy has hinted on his Presidential ambition and has promised Ghanaians to legalize marijuana and same-sex marriage when elected as President of Ghana.

Showboy made his intentions of becoming the President of Ghana in the future known via twitter in what we call a ‘mini s manifesto’ to Ghanaians.

According to him, in other to become Ghana’s president, he’s first going  to contest for the Parliamentary seat at Akim Oda constituency in the Eastern Region.

Ghana Grows The ‘Best’ Weed; Why Are We Not…

“I will legalize same-sex marriage in GHANA, I will legalize the use of cannibas and weed, and I will make internet n entertainment free !! The whole country will be hot spot n everybody will enjoy free WiFi .free WiFi is equal to free education !! Common sense will be a subject”

The young ambitious man also explained why he wants homosexuality legalized in Ghana.

“Ain’t gay, and I will never be gay or homosexual but I don’t see why u have to hate on another human being of his kinda of choice n his way of life !!! If he happy with another man .. let him be .. if u smoking ur weed to get high … high ur self .. nobody gonna judge nobody” 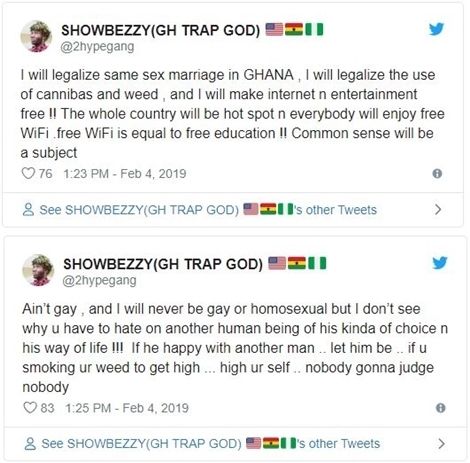 DADDY LUMBA vs KOJO ANTWI: Kojo Antwi Breaks Silence On “WHO IS THE BEST?”