Tochi, a BBNaija star, has turned to social media to tell his fans and followers how disappointed he is in modern ladies who refer to ake out with dogs and s3x toys rather than human beings.

It is common knowledge that many women have turned to sex toys to satisfy their sexual urges, but the portion of his tweet that perplexed me when I read it was the section where he included dogs, implying that sleeping with dogs has become the norm for some women. 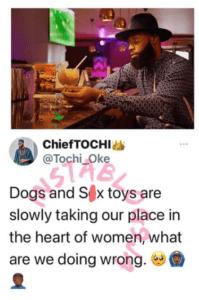 BBNaija: JMK exclusively reveals that She Chose BBNaija Over Being Called To The Bar (Video)

Fan Of Whitemoney Gifts Him A Toyota Venza Car (Video)

BBNaija: WhiteMoney Allegedly Impregnated A woman Before Entering The Contest(Video)