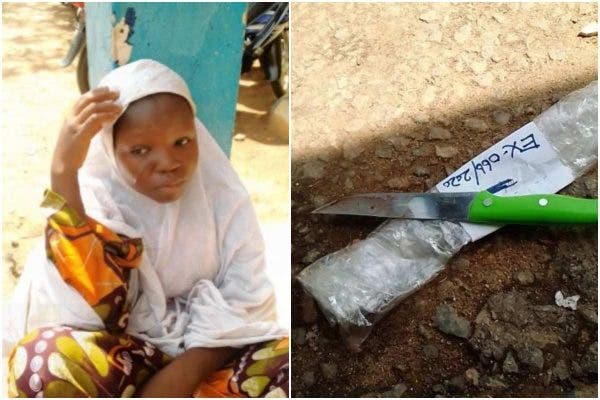 A 17-year-old wife has allegedly stabbed her husband to death after he tried to have s3x with her.

Salma Hassan, a resident of Itas-Gadau, was paraded at the Bauchi Police Command on Tuesday, May 19, for stabbing her husband to death 11 days after their wedding.

According to her, when her husband approached her for sex that night, she thought what he was doing was wrong, so she objected.

However, her husband beat her and tried to force himself on her. She said she then picked a knife to scare him but mistakenly stabbed him with it.

The murder weapon, a knife, was recovered by the police with blood stains on it when Salma was arrested for culpable homicide.

She said: “We were married. We loved each other.

“I never knew that sex is a marital obligation. On that fateful night when he approached me for sex, I refused him because I have never been involved in it. I thought he wanted to defile me.

“He later got angry and was trying to force himself on me with slaps and beating, then I picked up a knife to scare him away but he kept coming. I didn’t know when I stabbed him with the knife in his chest.

“I have already given my statement. I’m in great suffering. I’m in great bitterness. I don’t know what will happen to me now. But I wouldn’t have done what I did if I knew better.”

JOIN THE FUN, SHARE THIS !!!
Share
Related Topics:A 17-year-old wife has allegedly stabbed her husband to death after he tried to have s3x with her.Salma Hassan
Up Next

Pregnant woman in labour dies at Police checkpoint over lockdown

I asked my friend to test my boyfriend, now they’re married with two kids – Lady cries out